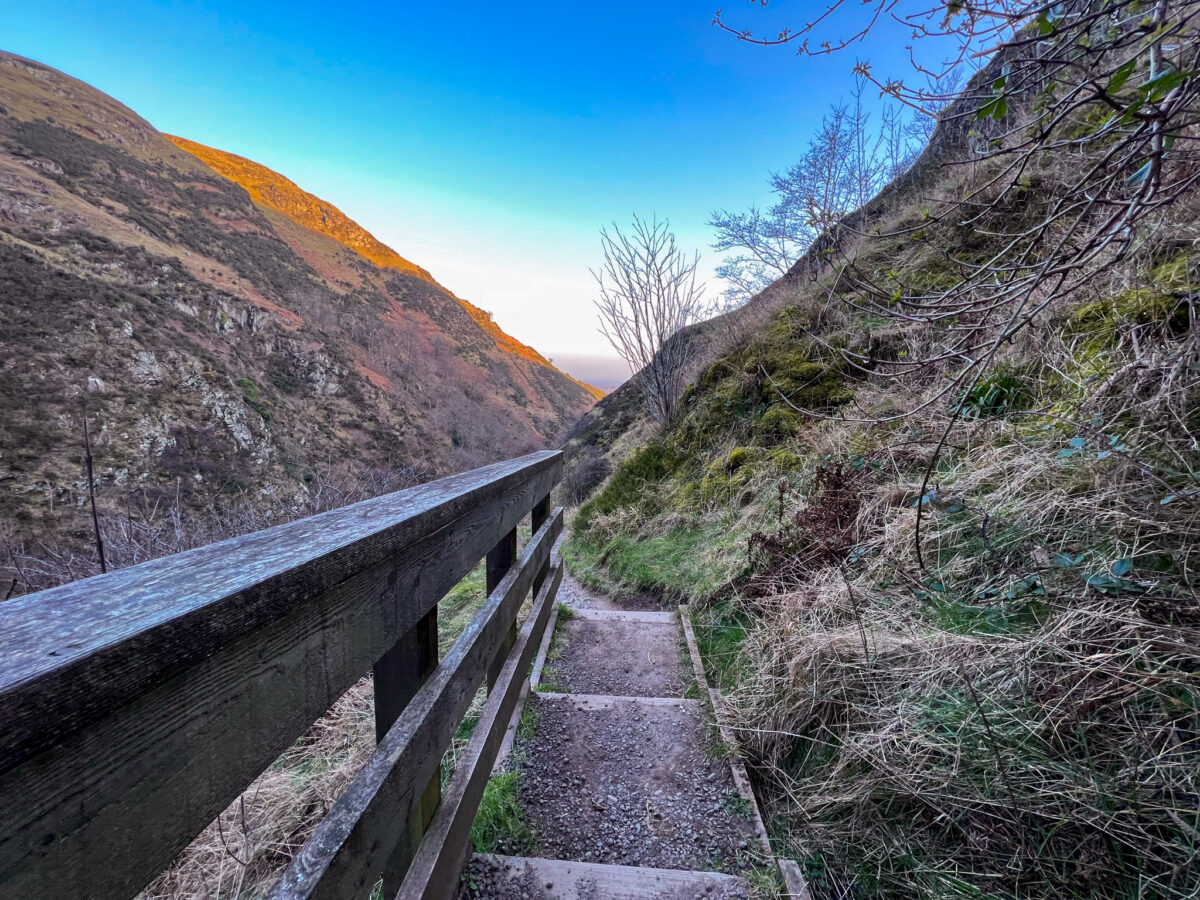 Alva Glen is a steep sided gorge nestled in the Ochil hills in Clackmannashire, just north of Alloa. The walk is short and easy for the most part, passing a few waterfalls along the way and with a climb up to a viewpoint at the end looking back down the valley to the south and overlooking Smugglers Cave in the gorge below.

The walk through the glen begins at the car park. The winding path follows Alva Burn up the glen, passing quite a few waterfalls along the way. The first is a dam which in the past was used to power the mills of Alva.Near the beginning of the path you will come across a big bear statue and some metal musical pipes near the beginning of the path. You need to collect a good stick along your way to use or you’ll have to whack the pipes with a water bottle like we did!

When you pass the bear statue the path climbs up to a pipe (which used to supply Alva with its water) and then a little gate, where the path levels out quickly as it continues alongside the burn. You will follow alongside this old pipe for a while, with the burn right next to it. There are some sections of the path here where you can have a play in the burn, and some cute wooden bridges as you go.

When you reach the bigger waterfall farther up the glen, the path starts to climb and zigzag steeply upwards, taking you to a viewpoint looking back down the gorge to the south. You can continue north from here along the now flat path, through a field with sheep. When you reach the iron railing you’ll be able to see back down into the gorge with a great view of Smugglers Cave.

The path is a bit uneven in parts but it’s not a difficult walk.

The waterfalls are super pretty, and the view back down the glen from the top of the climb is beautiful. We took our time and the kids really enjoyed playing in the burn, going over stepping stones and fallen trees.

Alva Glen is located amongst the Ochil hills in Clackmannanshire, just west of Tillicoutry on the A91. The glen is well signposted from the little town of Alva but if you stick it into google maps you’ll find it no problem.

There aren’t any train stations nearby, but Alva is served by several bus routes so I can be accessed by public transport.

This walk amongst the Ochils is incredibly pretty. It’s not too long for little legs but still feels like a decent walk for them. A hidden gem and an absolutely beautiful wee spot. We were here before spring had fully sprung and it was lovely, but in spring/summer it’s even more leafy and green than in the photos.