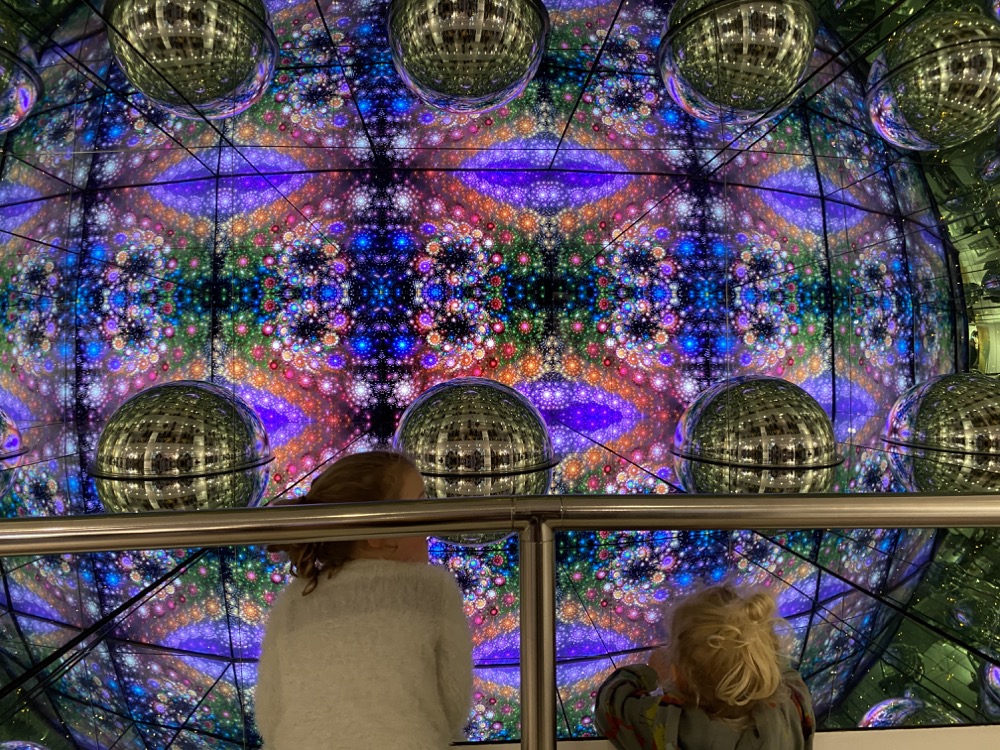 Camera Obscura and World of Illusions is one of our favourite indoor places we’ve visited in Scotland. Early last year we took a day trip through to Edinburgh on the train. We had intended on visiting Edinburgh Castle, but when we arrived found it was closed due to high winds. (Make sure to be more prepared than I am and check these things before travelling folks, especially on a stormy day!) So we decided to head into Camera Obscura instead because it’s right next to the castle and because we absolutely love it.

So what is Camera Obscura? It’s five floors of lights and sounds and activities and interactive exhibits and optical illusions, packed into what from the outside looks like a tiny building. (Even the building itself is an optical illusion!) There’s also almost 360º views over Edinburgh from the top floor.

The first floor is mainly taken up with a shop and the admission desk. Once you’ve paid you’ll head up the stairs to Bewilderworld. One of the main attractions is the mirror maze, which is exactly what it sounds; a maze made of mirrors. It takes a while for your brain to figure out what’s going on, and finding your way around without sticking your hands out in front of you is pretty tricky. There is someone cleaning the finger and faceprints off the mirrors pretty much constantly, which makes it harder to discern what’s a mirror and what isn’t, even with sticky kid fingers everywhere.

Check out the vortex tunnel on this floor too. As you walk along the metal platform, the twisty tunnel turning around you has you feeling like you’re going to fall over. Made me feel a bit sick but the kids must’ve gone through it about 15 times before we moved on. They had a great time playing here.

Floor three has an infinity corridor, magic mirrors that make you tiny and tall, thermal camera, optical illusions and the eye spy Edinburgh exhibit which lets you see what’s happening in the city around the Camera Obscura building in read time. Floor four is full of light exhibits and illusions; kids will love the shadow puppet wall and the severed head exhibit! The fifth floor has a whole bunch of plasma globes and tubes letting kids explore electricity, and also a wall of magic eye drawings which you could spend ages trying to see. The shadow wall here captures your shadow and there’s an interactive floor mat where you can chase fish or play football or burst bubbles.

The top floor is the rooftop terrace where you get views over Edinburgh, all the way to Arthur’s Seat and the Firth of Forth, and of course views of Edinburgh Castle and The Royal Mile. The Camera Obscura itself is also up here. You’ll get a show time on arrival and will get this unique perspective of the city from in here!

There are so many exhibits to watch and play with. The wee ones favourites were the singing and dancing cats and mice; they’re like a mini puppet show. He also loved the infinity room, the skeleton that mimics your movements and dances with you, and the vortex tunnel. He spent ages in the maze too but he did run into a mirror once when he got overexcited.

The big one spent ages in the electricity room playing with all the different electricity balls. She loved the electronic spirograph on the top floor and had great fun with the shadow walls.

This place is a full on sensory overload, especially for little kids. The wee one is knackered after a couple of hours here and every time will sleep through the entire 50 minute train ride home.

Under 5’s are free, adults £16.50, kids are £12.50 but you can get free entry for kids with a valid child ScotRail train ticket. Tickets are valid all day & you can leave/return as you please.

Camera Obscura is packed full of interactive exhibits. It’s a full sensory overload and a brilliant day out. Highly recommend.