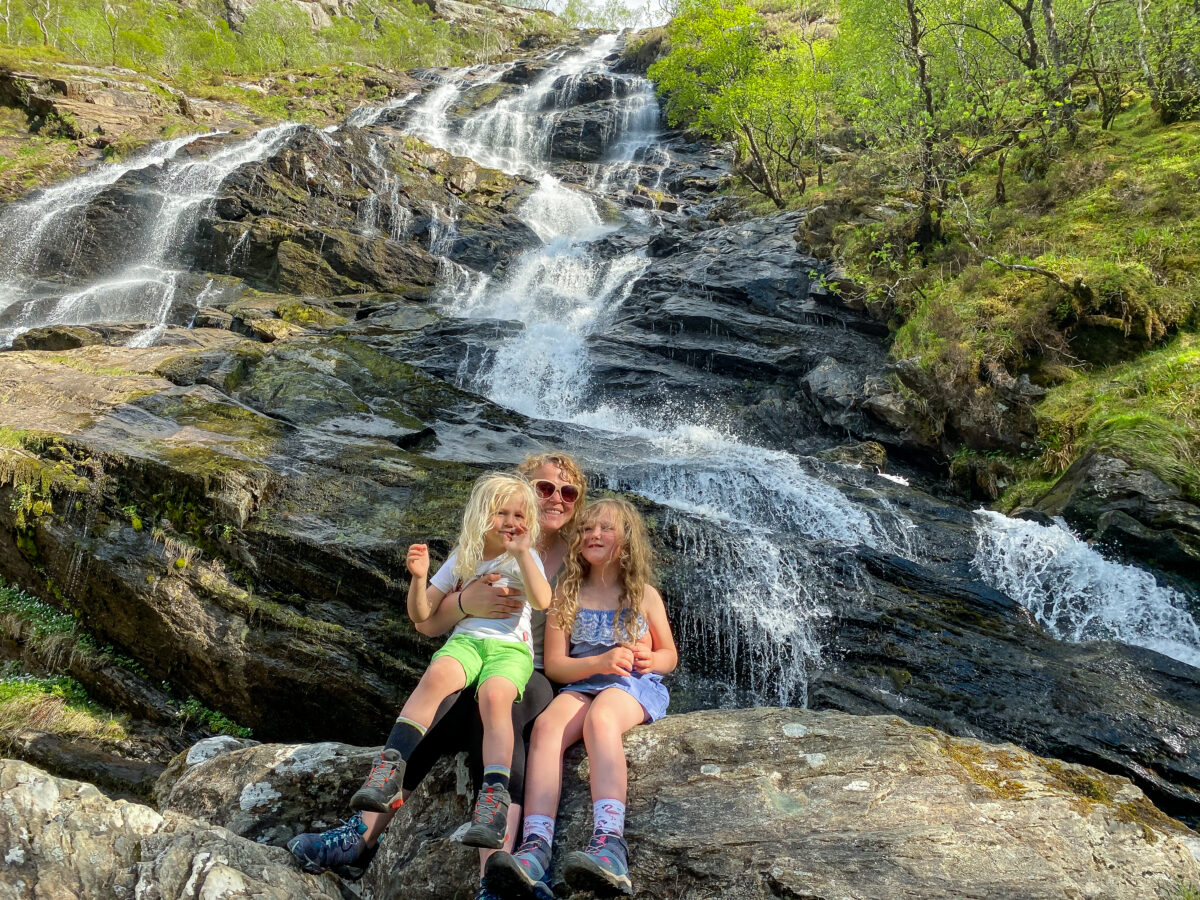 Nestled in the Nevis Gorge, the huge cascade of An Steall is Scotland’s second highest waterfall, and the second highest in the UK. An Steall Bàn, meaning The White Spout in Gaelic, measures in at a single drop of 120m. If you’re a Harry Potter fan, you might recognise Steall Falls from the movies where the falls are featured in the background of Hogwarts, in the background of various quidditch matches and in the Triwizard Tournament.

The walk to Steall Falls begins at the very end of the road up Glen Nevis. The path is signposted with Steall Falls, Spean Bridge and a few other places. Straight away you head into woodland, which quickly turns into a rocky path following along the side of the meandering Water of Nevis, crossing a few tiny waterfalls running down the side of the gorge into the river beside you. At one point you’ll head over a ledge where the path has been cut out of the rock.

The path does have quite thick tree cover but you get the odd glimpse of the huge mountains rising up beside you through breaks in the trees, and also the occasional peek of the falls from afar as you work your way along this path. The gorge will eventually narrow and you’ll get a better view of the river crashing through the gorge below. Then you’ll head up a rocky section and out the top of the gorge where the whole glen just opens up in front of you quite spectacularly with the mountains rising up on every side and a grassy meadow stretching out in front of you and the falls just beyond. Keep heading along the path and eventually you’ll come to the infamous rope bridge.

This is a great spot from which to view the falls, or you can head across the river to see them up close. The only issue is, there’s a decision to make at this point because you have to get across the river to get up close. So you will either need to go across the rope bridge, or you’ll have to wade through the river. The river isn’t deep, or at least it wasn’t when we were there. It was probably about ankle/thigh deep for us and so we took our shoes and socks off and went for that option.

If I’d known in advance I’d have brought water shoes or wellies for us because the stones on the river bed don’t give as relaxing a massage as I’d like… (I would advise taking some footwear if you’re planning to cross the river. And obviously take great care of kids when crossing.) When you do get across the river, its a short walk to reach the falls. Bear in mind that you’ll have to return the same way you came!

Seeing An Steall Bàn up close is incredible though. It’s well worth the effort to get there; just don’t injure yourself doing it.

The walk to the falls isn’t super strenuous. Our 4 & 7 yr old managed it no problem with barely any complaints. However the paths are quite uneven, with drops and slippery bits and a couple of rocks to climb up, so care should be taken with young kids. Make sure you take conditions into account when deciding whether to cross the river too.

The rope bridge is made of 3 steel enforced ropes across the river: one to stand on, and one on each side for handrails. They don’t really move much and are pretty sturdy but it does feel pretty high when you’re on it. I definitely wouldn’t want to try it when it’s been raining; in fact I’d much rather wade through a river than go on that thing. We watched a few people go over it and it took various people between a minute and about 10 minutes to get across.

The rope bridge is too big for kids under the age of maybe 9 or 10. I don’t mean they aren’t allowed to do it; I mean they literally won’t be able to because they won’t be tall enough. The handropes are quite high compared to the bit you stand on and our 7 year old couldn’t reach both sides at the same time at all. She couldn’t even reach one side with both hands when she got about a quarter of the way across. Our 4 year old would have had to do a tightrope walk and although he’d have probably been up for it we decided it would be safer to wade through the river instead.

If you are planning on doing the rope bridge, be prepared to have a decent wait for it. There were quite a few big groups of people there when we went and the rope bridge queue took about half an hour.

Total distance: 3.5km
Ascent: 220m
Duration: It took us about 4 hours in total but we were at the rope bridge for 40 minutes. We waded across the river and we spend some time playing and having snacks by the waterfall.
Difficulty: It’s not a difficult walk but the paths are uneven, with some steep drops and slippy bits. Would rate it a 3/10 for difficulty on a dry day. Probably would put that higher if it’s been raining.

Wheels: Not suitable for wheels.
Parking: There is parking in a small car park at the beginning of the path. However when we visited it was a nightmare to get to because the number of people parked along the road turned it into a single lane road with barely any passing places.
Toilets: No toilets here.
Clothing needed: Good footwear needed due to uneven path. Wellies/crocs/water shoes of some sort for crossing the river.
Dogs: Dogs welcome. Loads of them around.

The beginning of the walk to Steall Falls is located about a 25 minute drive (7 miles) from Fort William, at the end of the C1162, Glen Nevis. There is nowhere else you can drive at this point. The road ends at the trail and if you head back along it you’ll get back to Fort William.

Getting there is either a walk or by car. There is parking in a small car park at the beginning of the Steall Waterfall trail. However when we visited it was a nightmare to get to because the number of people parked along the road turned it into a single lane road with barely any passing places. If you aren’t comfy reversing with no space around your vehicle and it’s busy, I’d consider parking a bit further away and walking up to the trail.

No cost at all for this walk or for parking.

This is one of the best wee walks we’ve done with the kids. The walk itself never gets boring and the ending, well that’s just spectacular. If you can get across the river safely to get close to the falls that’s totally worth the effort. But even just seeing and hearing them from the viewpoint is amazing.