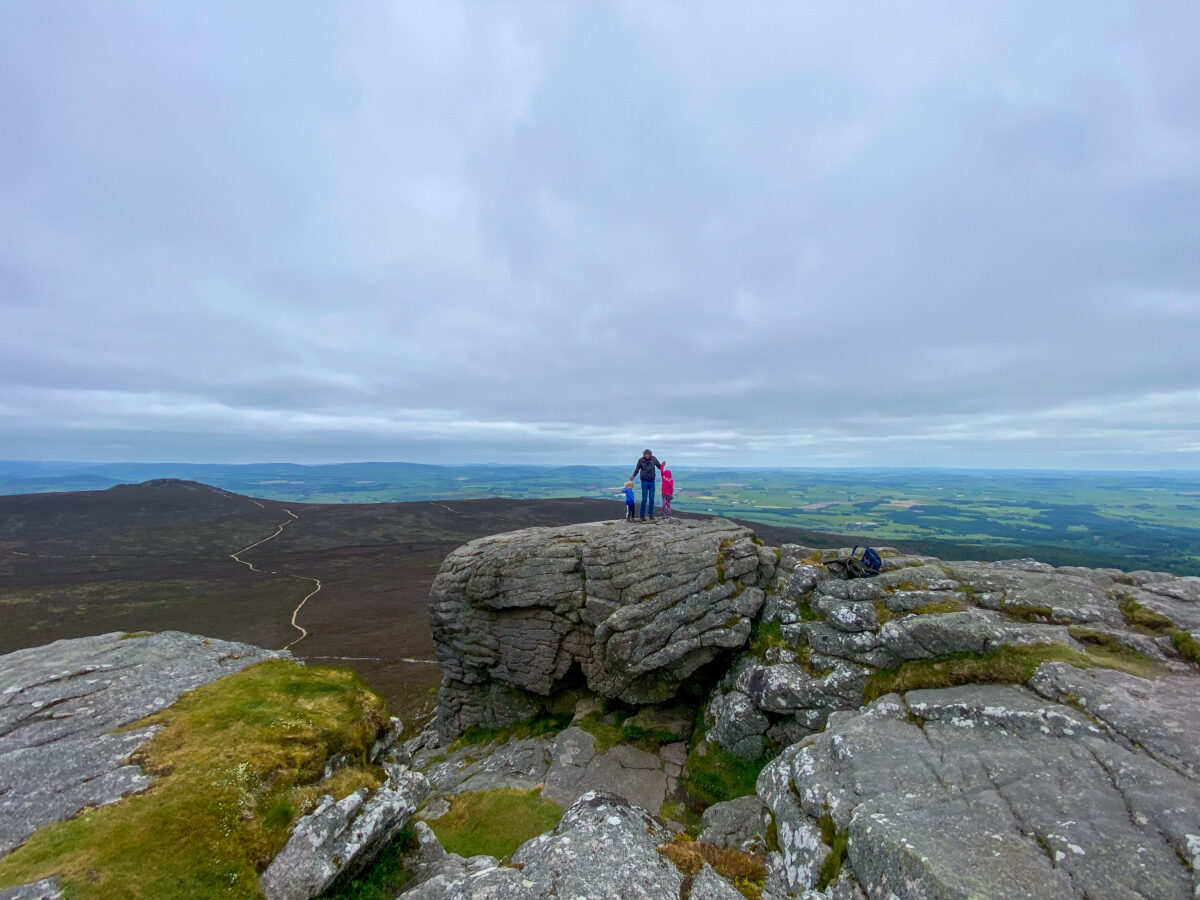 Bennachie is a range of hills in Aberdeenshire. The range has several summits, the highest of which is Oxen Craig at 528m (1733ft). The most prominent peak in this landscape though is Mither Tap (518m), which dominates the skyline in the area. From the top are spectacular views across the area.

The hills and forest around here have a rich history, with many battles, monuments, myths and legends. Amongst these is the impressive monument of Mither Tap hill fort which can be seen from miles away, thought to have been built to display the power of a powerful Pictish leader. There have also been a few aircraft crashes on Bennachie in the past.You can see part of the wreckage of one in the Bennachie Visitor Centre, but you also might come across some wreckage while you wander on the hill. If you do, be sure to leave it where you find it and don’t disturb it because it’s left on the hillside as a memorial to the young men who died.

The Legends of Bennachie

Legend tells that Bennachie was once guarded by a giant known as Jock o’ Bennachie, whose enormous bed can be seen to the east of the Craigshannoch peak. Known as Little Jock’s Length, this plot of land measures 600ft in length, suggesting that Jock was pretty tall, even by giant standards! Jock had a bit of a beef with another giant, Jock o’ Noth, who lived on the aptly named hilltop of Tap o’ Noth some 13 miles away from Bennachie.

It is said that the two used to throw and kick huge boulders at each other from afar, allegedly warring over the affections of a young maiden. Jock o’ Bennachie now sleeps in a cave underneath the mountain because he lost his key. So now he is just resting there, waiting to be released. No-one has ever found the key, but definitely keep an eye out when you’re wandering!

The shortest route to the peak of Mither Tap begins at the Bennachie Visitor Centre. Start at the car park here and follow the green Mither Tap Timeline Trail which has way marked routes. You’ll begin walking along a level path through the forest alongside a wee stream. You’ll turn right after a short while to stay on the green trail, and then right again where you’ll start to head uphill a bit through the pine trees.

The forest is quite dense, but then you’ll pass the tree line and they’ll begin to thin out as you get higher up the hill. The path goes from a woodland path with roots and pine needles to a stone path winding its way up the hill, surrounded by heather and the odd windswept tree.

You’ll come to a T-junction; take the path to the left to head up to the summit of Mither Tap. From here, your route to the top will take you through the walls of the ancient stone hill fort, and up over the stones the fort entrance ruins. You will have to climb up a bit at the top but it’s not too tricky: just steep.

From here you can head back down past the walls of the fort and head to your next peak which you’ll be able to see from Mither Tap, or back down towards the visitor centre the way you came up the hill.

The path to Mither Tap is well signposted all the way up to the top and very easy to follow. Be aware that the granite slabs at the top can be slippery when it’s wet, so make sure you take care when clambering over rocks. Much like any hill, it can be very windy up there; layers are necessary! The views from up here are quite incredible though, and definitely worth it.

The view from the summit of Mither Tap is quite something. You can see for miles from up there, over the heather moors towards Oxen Craig in the west and over the farmland in the east all the way to the coastline and the North Sea.

The kids loved the story of Jock o’ Bennachie, and they really liked exploring the hill fort and hearing about who might have built it and how long ago that really was. There are also a few good climbing trees on the path which they enjoyed!

Bennacchie is located on the eastern edge of the Grampian mountain range in Aberdeenshire. The Bennachie car park is situated at the visitor centre, around 5 minutes from the A96 between Pitcaple and Blairdaff. It is roughly an hours drive from Aberdeen on one side and Elgin on the other, and a 15 minutes drive from Inverurie.

Getting there with kids by anything other than car would be an impressive adventure.

Bennachie is a great place to explore with kids. There are options on how far you want to walk, still taking in a mountain peak, so you can either head to Mither Tap and back down, or head further along the trails to the other peaks in the range. The views from the top are stunning. It really is one of the best wee hills in Scotland.