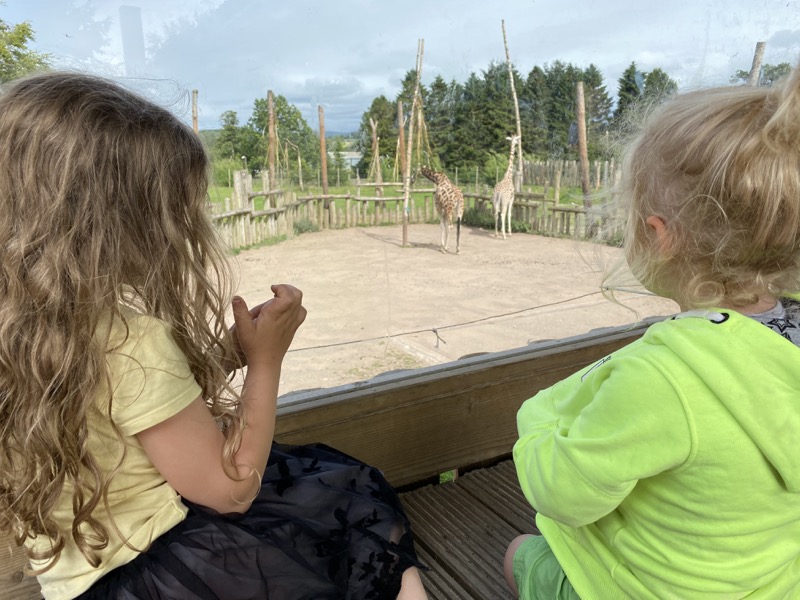 Blair Drummond is the closest ‘zoo’ to where live, and being from an animal mad family I can say that we have probably visited Blair Drummond more than twenty five times in the past few years. It’s a fun filled, tea and ice lolly fuelled and most definitely a full on day out. We absolutely love it and the kids, whenever they are asked where they’d like to go on a daytrip will invariably excitedly yell “THE SAFARI PARK” at me.

There is a lot to pack into a day at Blair Drummond, and there is so much to see that you have to be prepared to not do everything all in one day. We tend to vary what show we go to, mainly depending on the weather, but we do have a vague itinerary that we tend to follow when we visit, in order to get the most out of our day. It usually goes something like this:

Lions and tigers and… all the other animals

One of the main attractions at Blair Drummond, and one we always make sure to do every time is the safari drive. The first paddock you come to has rhino, water buffalo, cute little guineafowl, plus a few antelope too. The rhino are such impressive animals, but they are sometimes in their indoor enclosure where you can pop in to see them later, so don’t be disappointed if they aren’t in the big paddock when you go through. Next up is the lion enclosure. You never know whether they’ll all be lying sunbathing or eating (be warned: they may be chewing on large bits of farm animal) or having a play or hiding from the rain. The monkeys are next and then finally is the deer and antelope enclosure.

Another of the main attractions at Blair Drummond is going on a boat trip, round the river bend, to see the chimpanzees on their island. The boat trip takes roughly 15 minutes and you’ll hear a little recorded information tape on the way there all about the wee chimpanzee family who live at Blair Drummond. The chimps do occasionally throw things – mainly large sticks – at the boats. But don’t worry; there is a cage on the side of the boat blocking anything (or most things) they might throw. In all the times we’ve been on the chimp boats we haven’t ever not seen a chimpanzee. There can sometimes be a queue for the boats, but the park do tend to put on extra boats when it’s busier so you don’t usually have a long wait.

Both the shows they have at Blair Drummond, the sealion and the bird of prey shows, are really fun. The sealion show is a great way to learn about these animals, about their plights in the wild, about conservation in general and about how they are looked after and kept healthy in captivity. I’m not generally a fan of shows with animals doing tricks, but this isn’t what the sealion show is about. In fact, the bird of prey show manages to do the same and is basically an audience watching a training sessions. You don’t know what birds you might see so it’s always a surprise. Both the shows manage to be fun for the kids, and also educational at the same time.

One of our highlights is always the lemur walk through enclosure. This is a group of several large enclosures you walk through where the lemurs are roaming free around you. Sometimes they are busy doing lemury things; sometimes they will come right beside you on the paths or little fences and you’ll be close enough to touch them. (Don’t touch them though. They might take offence to that.)

There are so many other animals in the safari park for you to see including the giraffes, elephant, the leaf cutter ants in the elephant house are a favourite of ours too, the rhinos, zebra and tigers. The afternoon tiger talk is great and usually a good time to see the tigers being active. There are all the monkeys, the penguins, the meerkats, the otters etc. There is also the farm area with sheep, goats, chickens, llamas, pigs etc.

Play the day away

The massive play fort is one of the highlights of every trip to the safari park. The kids could run about there for hours. We’d barely need to do anything else and they’d be absolutely delighted with their day. It has a whole bunch of slides and loads of bits to climb and play on. The pirate ship play area is great for younger kids, It has a few slides and is in the middle of a big sand pit. There are also quite a few swings around this area, and a big spiders web here to climb too.

The final thing I’d mention that we absolutely love doing is going on the astroglide. This is a big bumpy slide that you go down while sitting on a mat, and it is honestly always one of the most fun parts of our day at Blair Drummond. The little one has been going down it since before he was one year old and has loved it ever since. We all love this; it’s brilliant fun.

The restaurant serves up a good selection of hot and cold food. The food is expensive but to be honest nobody expects anything else in a place like this. There are a few ice cream, tea & coffee, donut stalls and other snack shacks dotted around too. You can bring stuff to cook in the barbecue area and there are loads of places you can just stop and have your own picnic too.

If you buy tickets online before you arrive prices are £16.50 for adults, £13.50 for kids, free for under 3’s. It’s a little bit more expensive per person if you buy on the gate on the day. There are sometimes free child passes available on safari park leaflets, so keep a look out for those.

There is so much to see and do at Blair Drummond. Top things not to miss are the safari drive, the lemur walk through and the astroglide. It is a full on day out, but I can honestly say it’s one of our favourite places to visit, even though we’re always knackered after it.